Chris MacDonald, patent attorney, considers the uncertainties over the extent of protection afforded by Registered Designs following the recent decision from the UK Supreme Court regarding the Trunki suitcase and rival Kiddee Case.

“You’ve done really well, congratulations, to get this far, but I just don’t think it’s a business opportunity” – Deborah Meaden

“I wouldn’t buy it, I wouldn’t invest in the company, so I’ve no interest in this at all” – Duncan Bannatyne

While perhaps not quite in the same league as “guitar groups are on the way out, Mr Epstein”, the curt dismissals of the Trunki ride-on suitcase in a 2006 episode of BBC’s Dragons’ Den must, with the benefit of hindsight, go down as an error of judgment for the Dragons concerned. The product has been a great success, to the extent that the inclusion of the following picture is likely redundant for all but a handful of readers. 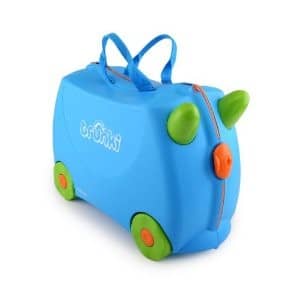 Errors of judgment were also the order of the day in a recent decision from the UK Supreme Court, which found that the Kiddee Case, a rival product produced by PMS International Group Plc, does not infringe a Registered Community Design (RCD) filed for the Trunki suitcase by Magmatic Limited in 2003. An image from the Magmatic RCD (left) and of the Kiddee Case (right) are shown below. 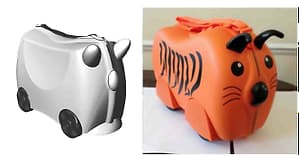 1. For concentrating too much on specific points of difference, rather than on the overall impression created by the RCD and the alleged infringing product; and

2. For ignoring the contrast in shading between the wheels and the body of the suitcase in the RCD.

The overall impression created by the RCD was held to be that of a horned animal, whereas the Kiddee Case gave the impression of an animal with floppy ears or, in another variant, an insect with antennae.

The Judgment also reinforces the position that a registration filed with black-and-white or greyscale images is not, apart from in some specific circumstances, restricted to any particular colour. However, where a contrast is shown, it does now seem that this will be seen as a limitation to the scope of the RCD.

Since the wheels of the representations filed in the RCD were shown in a contrasting shade to the body, and in the absence of any convincing alternative reason for this decision, a feature of the registration was that the wheels and body of the suitcase were of different/contrasting colours or shades.

Another issue raised in the course of the hearing, but sadly not fully resolved in the Judgment, was whether the fact that the CAD images filed in the RCD showed unadorned sides of the suitcase should be taken to limit the registration to a suitcase devoid of surface decoration.

The Judgment of the Supreme Court includes comments, albeit on an obiter basis, that it is entirely possible for the scope of protection of an RCD to be limited by an absence of ornamentation. Indeed, there may be situations where this is desirable, and it would not be right if an applicant were deprived of the possibility of including a clean, uncluttered, appearance as an element of their design. However, the Judges stopped short of providing any actual ruling on whether the Magmatic RCD was so limited, stating that it was a relatively minor point, not resolved in the Court of Appeal, and would not be of much assistance in deciding other infringement disputes.

This final view is disappointing because it leaves open the question of whether the use of plain rendered CAD images in an RCD will typically limit protection to articles devoid of surface decoration. I find it difficult to see how some ruling on this point would not have been of assistance in helping to reduce the uncertainty surrounding the use of CAD images in a registration.

The Judges’ position to the effect that surface decoration was only a minor consideration in the matter is also confusing.

The accepted position is that where an RCD clearly relates to the shape of a product, the registration protects products of that shape, regardless of the presence of surface decoration. In taking note of the decoration on the outside of the Kiddee Case “because it significantly affects how the shape itself strikes the eye, and the overall impression that it gives”, it seems to me that the Court of Appeal and, by extension, the Supreme Court, would be departing from this position if the scope of the RCD were not limited to a suitcase with unadorned sides.

In addition, the assessment of the overall impression of the RCD as a horned animal appears to have been based, at least in part, on the absence of decoration on the sides of the suitcase in the CAD images.

Finally, the Court of Appeal made a point of considering this issue separately from the remainder of the first criticism outlined above, which should suggest that it carried some merit in isolation.

So in summary there remain a number of uncertainties over the extent of protection afforded by Registered Designs following this Judgment. What can be said is that further emphasis seems to have been placed on the overall impression test for determining infringement, and that greyscale images, while not limited to any particular colour or colour combination, can limit protection if contrasts are shown. The status quo that using plain line drawings in an RCD will typically provide the broadest protection also remains, but what is less clear is precisely when the absence of surface decoration in images, of whatever type, will be seen as a limitation rather than encompassing all possible ornamentation.

Despite these uncertainties Registered Designs can still provide effective protection for products, especially from close or direct copies. Care must, however, be taken when filing an application to ensure that the registration is as effective as possible. It is easy to say with hindsight that Magmatic would have been better off filing line drawings without any shading, and this alone may not have saved Magmatic, but the rendered CAD images do appear to have limited their protection unnecessarily.

The EUIPO (until recently called OHIM) – the body responsible for granting RCDs – is unusually receptive to a number of different formats for representations, and the different types of images (line drawings, rendered images, photographs etc) each carry their own benefits and drawbacks. Selecting the right type of images to represent a design is perhaps more important than ever, and AdamsonJones can help you to ensure that the right representations are filed for your particular situation.