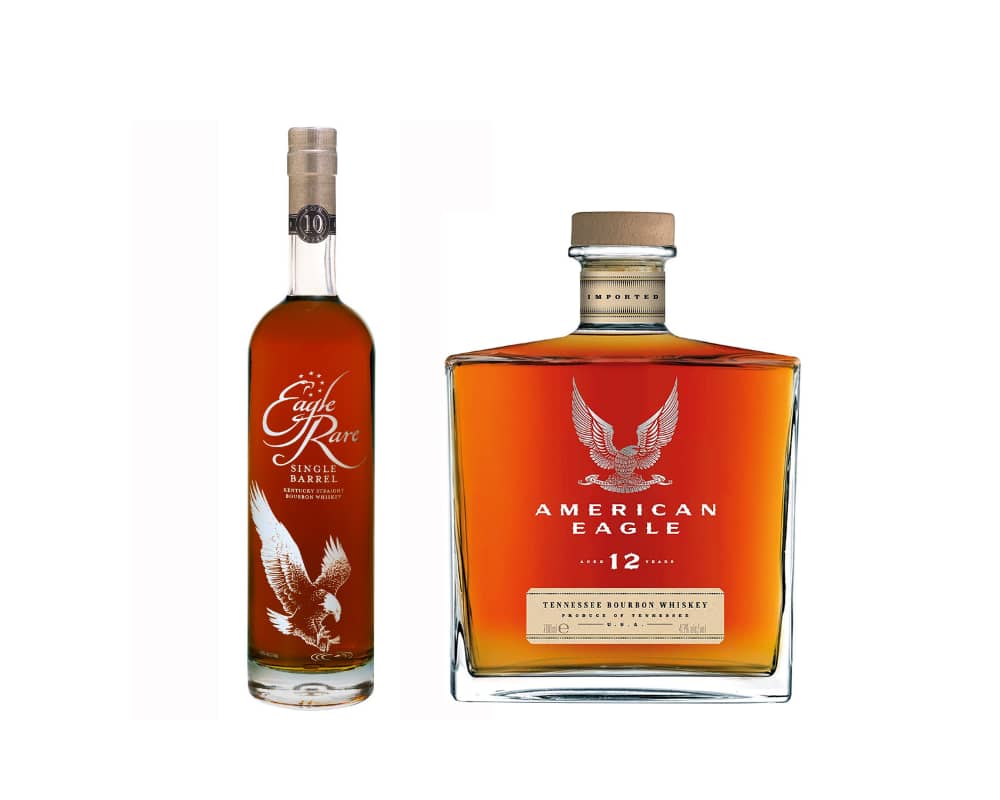 EAGLE RARE is a well-established, high quality Kentucky straight bourbon whiskey made by Sazerac at the Buffalo Trace Distillery, Frankfort, Kentucky. It was first made in 2001 and is marketed in two expressions of the brand, a 10-year old version and a 17-year old version. The 10-year old is made only in limited quantities and is available in the UK only “on allocation” (i.e. the amount for sale in the UK depends on the amount released each year and allocated to the UK by Sazerac) and it is sold only in limited outlets in the UK. The 17-year old is very scarce indeed and much sought after by connoisseurs of aged bourbon. The recommended retail price (RRP) of the 10-year old is around £35 for a 70 cl bottle and the RRP of the 17-year old is in the region of £120 for a 70 cl bottle, when available at all in the UK.

AMERICAN EAGLE was conceived as a brand in June 2018. It is sold in three versions: a 4-year old, an 8-year old and a 12-year old version. Each is a Tennessee straight bourbon. The 12-year old was launched in late February 2019 at about £65 for a 70 cl bottle, though the price has since been reduced, and it was only released in small quantities. The 4-year old was released in September 2019 at around £25 a bottle, in larger quantities. The 8-year old version has only very recently been released, in limited quantities at around £40 a bottle. Both these prices have been reduced somewhat in recent times to promote the brand.

In addition to applying to invalidate Halewood UK TM no. 3319844, Sazerac also brought infringement proceedings in the High Court against Halewood.

The allegations of trade mark infringement are made on two separate grounds:

i) First, that the AMERICAN EAGLE sign is similar to the EAGLE RARE trade mark and is used in relation to identical goods, namely bourbon whiskey, and there is consequently a likelihood of confusion on the part of the UK and EU public. [Section 10(2) of the UK Trade Mark Act 1994 (the Act) and the corresponding article 9(2)(b) Regulation (EU) 2017/1001 of the European Parliament and of the Council on the European Trade Mark (the Regulation)];

ii) Second, that the sign AMERICAN EAGLE is similar to the trade mark EAGLE RARE, which has a reputation in the UK and in the EU, and the use of AMERICAN EAGLE takes unfair advantage of the distinctive character or repute of EAGLE RARE and/or is detrimental to its distinctive character. [Section 10(3) of the Act and the corresponding article 9(2)(c) of the Regulation]

Two main points considered in relation to a likelihood of confusion are ‘direct’ confusion and ‘indirect’ confusion. The Court held that the average bourbon whiskey consumer cares about the brand they are buying and that their knowledge is sufficient to mean that they would not assume that AMERICAN EAGLE and EAGLE RARE were the same product. However, the Court concluded that the same average consumer’s knowledge was insufficient to allow them to appreciate that AMERICAN EAGLE and EAGLE RARE were produced by different entities who were not economically connected.

Therefore, the Courts found that the average consumer would not mistakenly believe that the bourbon whiskey produced by Halewood is the same as Sazerac’s bourbon whisky. However, it is possible that the average consumer is likely to mistakenly believe that Halewood’s whiskey was produced by the same company or group, as Sazerac’s whiskey, which is an indirect confusion

Regarding unfair advantage, the Court acknowledged that Halewood might gain additional sales from being associated with the EAGLE RARE brand, due to its quality, reputation, and history. However, as Halewood was not actively intending to gain an advantage from that association and as Sazerac’s marketing budget was not very significant, Halewood could not be said to be “getting a free ride” or to be taking advantage of any significant financial investment made by the Sazerac. This is so despite Halewood being aware of the EAGLE RARE prior to launching its own brand as well as being reckless as to whether AMERICAN EAGLE would take advantage of EAGLE RARE.

However, as there exists a likelihood of indirect confusion, Halewood’s use of the AMERICAN EAGLE mark would cause detriment to the distinctive character of the EAGLE RARE brand.

This case highlights the importance of considering factors specific to the relevant market of the intended product when choosing a mark.

If the overall appearance of a product is protectable by a design registration, what about its individual components?